What Is an Intervention? 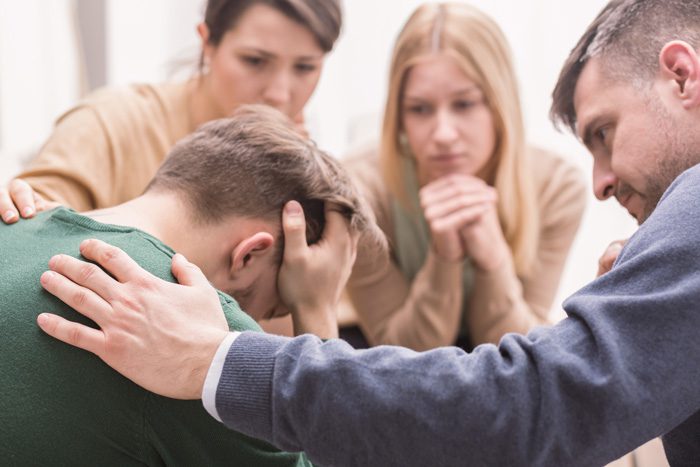 At one time, the thought process around addiction was that you couldn’t help someone who didn’t ask for help and that someone abusing drugs or alcohol had to be “ready” to get treatment for his addiction.

The idea that you had to wait for the person to hit rock bottom before you could intervene was another popular belief.

Times have changed. We now know addiction is a disease that changes brain chemistry, rendering those affected by it unable to resist cravings for their drug of choice. Someone with an addiction also has a lower capacity to appreciate the impact his behavior has on those around him.

These two factors are part of the reason that addiction is said to be a family problem. Holding an intervention involves family and close friends coming together to find a solution that will allow their loved one to begin a recovery journey.

Many people are familiar with the concept of an intervention due to the popularity of A&E’s “Intervention” television program. It does a good job of portraying how an addicted person develops a type of tunnel vision around her drug of choice. Her world becomes smaller and smaller as the addiction grows stronger.

Addiction becomes the first thing she thinks about in the morning. Does she have something to deal with her cravings? If not, how can she get the resources (money, a ride) to get her drug of choice?

The television show also features interviews with family members who are clearly frustrated, hurt, and concerned that their loved one will come to serious harm if the situation doesn’t change. This drive to change the situation forms the basis for the intervention. The family has decided that it isn’t prepared to accept the situation as it is anymore and wants to make a change.

Goals of an Intervention

Since an addicted person is very good at not taking responsibility for the consequences of his actions, one of the goals of an intervention is to confront him about his substance abuse. Up to that moment, some people won’t even admit they have a problem.

The other goal of an intervention is to persuade the addicted person to go to treatment. Addiction can’t be conquered through willpower alone.

An intervention is meant to come from a place of love and acceptance. Its purpose isn’t to shame or blame someone for their past behavior, since the addicted person couldn’t go back and change it anyway.

Stages of an Intervention

The intervention isn’t just a single conversation with the addict and his family members. It involves several steps.

The interventionist will be looking at the family dynamic for signs of other family members who may also be struggling with substance abuse or for those who are enabling the addict. (They will need addiction treatment or family counseling themselves.)

Arrangements will already be in place to welcome the addicted person at a treatment center if he agrees to go to treatment. The family will have a bag packed, so there will be no delay in leaving directly after the intervention.

2. The Intervention
During the intervention, the addicted person is brought to meet with the family members and the interventionist. (In some intervention models, this is a surprise. In others, the person with addiction is involved in the process from the beginning.)

The person is invited to sit and listen to letters the family members have written in advance. The interventionist is in charge of the proceeding and will keep things on track.

Each family member’s letter focuses on what the addiction has stolen from the person and that he can have a positive future if he goes into treatment. The family members also explain that if their loved one chooses not to get help, they will no longer support the addiction by providing money, a place to stay, food, a vehicle, or resources that prevent the person from feeling the consequences of his actions.

3. The Decision
Someone with a drug or alcohol addiction always has a choice about whether to get help. In most instances, the intervention is successful. However, there are some people who do turn down the offer of help. In this instance, the family must stick to its promise to withdraw its support.

The intervention is the start of a new set of rules for the family, since the situation can’t continue on in the same manner.